The work of the section is aimed at studying the response of the ozone layer to space weather events and processes in the Earth's magnetosphere associated with the precipitation of energetic particles of solar, space and magnetospheric origin.

Fluxes of energetic particles, in particular electrons of magnetospheric origin, have a significant effect on the behavior of the ozone layer. These particles in the lower polar thermosphere produce nitrogen oxides, which can penetrate into the stratosphere, affecting the ozone layer, thermal regime and climate. However, in the studies carried out so far on the effect of energetic particles on the ozone layer and climate, empirical models of electron precipitation have been used, which do not consider all the mechanisms involved in this process. Therefore, one of the main tasks of the section is the development of a new model atmosphere-ionosphere-magnetosphere, based on the coupling of the magnetosphere (Gamera) and atmosphere (EAGLE) models.

To simulate short-term changes in ozone associated with space weather, it is necessary to correctly describe the ionization rates of the atmosphere during magnetospheric storms and solar explosive events of different power. To calculate the ionization rates of the atmosphere, information is required on the fluxes of precipitating energetic particles, which are not fully covered by ground-based observations and measurements on satellites. For a correct description of the precipitation of the magnetospheric electronsit is planned to develop an empirical parametrization of energetic electrons precipitations on different time scales.

The developed models and parameterizations will be used to study the response of the ozone layer, ozone-depleting gases in the middle and upper atmosphere to precipitation of energetic particles during substorms and geomagnetic storms, solar eruptive events and other space weather phenomena. Verification of the results obtained will be carried out using satellite and ground-based observations.

Briefly, the main tasks of the section are:

WAVE DYNAMICS OF THE MIDDLE AND UPPER ATMOSPHERE

The group studies the processes of wave generation in the lower layers of the atmosphere, their propagation to high altitudes and the various effects that waves have on circulation, thermal regime and composition of the middle and upper atmosphere.

Diagram of the various wave mechanisms through which dynamic processes in the lower atmosphere can affect the ozonosphere, ionosphere and thermosphere 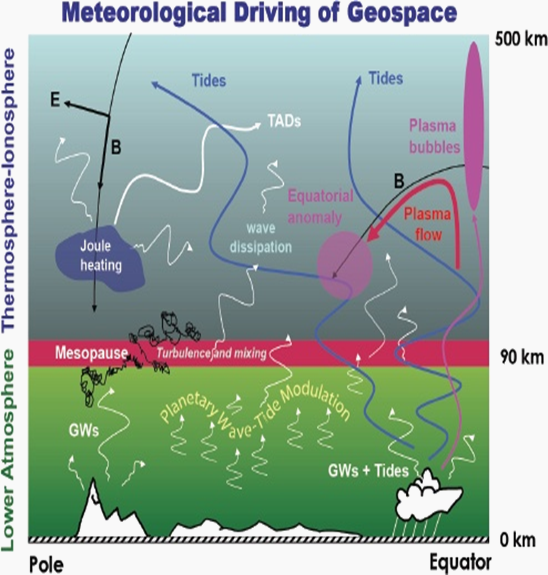 In the troposphere, mesoscale waves are generated by the interaction of winds with mountains (orographic waves), atmospheric jet streams and fronts, thunderstorms and convective clouds, atmospheric convection and shear flows, waves on the sea surface, typhoons, explosions on the earth's surface, volcanic eruptions, earthquakes, tsunamis, objects moving in the atmosphere, forest fires, etc.

The propagation and dissipation of atmospheric waves is influenced by horizontal and vertical profiles of the average wind and temperature, turbulent and molecular viscosity and thermal conductivity, hydrodynamic stability of the atmosphere, nonlinear interactions between different wave modes. Dissipating waves have a variety of effects in the middle and upper atmosphere: they create wave accelerations of the mean circulation, wave influxes of heat, break down and create turbulized regions, affect the rates of photochemical reactions and the composition of the atmosphere, create moving inhomogeneities of ion concentration, intensity of nightglows and other atmospheric characteristics.

The methods used to study wave movements include:

Modeling the ozone layer and climate

The aim of the unit is to study the influence of natural and anthropogenic, physical and chemical factors on the observed and future variability of the ozone content at different altitudes and in different latitudinal zones, to highlight the predominant role of individual factors in certain time periods, to assess the relationship of processes in different altitude intervals that affect the change column ozone content, study of the role of feedbacks between physical and chemical processes in the atmosphere in the observed variability of atmospheric ozone content and assessment of the level of surface UV radiation associated with changes in the ozone layer and the state of the atmosphere.

Based on the data of ground-based and satellite measurements, re-analysis and numerical modeling, the features of the variability of the stratospheric ozone content during 1980-2020 are investigated. Ground-based measurements include data from the World Ozone and Ultraviolet Radiation Data Center, satellite data include TOMS, OMI and SBUV measurements, and re-analysis data are MERRA-2 and ERA-5.

Numerical modelling of the variability of the ozone content and the gases affecting it is carried out using the chemistry-climate models of SOCOL and INM RAS - RSHU. To study the influence of natural and anthropogenic factors on the observed variability of the ozone content, the variability of the spectral fluxes of solar activity (CMIP-6 data), the sea surface temperature and sea ice coverage (MetOffice data), emissions from the surface of ozone-depleting (WMO 2018) and greenhouse gases (IPCC) and stratospheric aerosol content (satellite measurements). To calculate the future variability of the ozonosphere, scenarios of changes in emissions of ozone-depleting and greenhouse gases, projections of future changes in sea surface temperature and sea ice coverage, as well as solar radiation fluxes and stratospheric aerosol content are used.

The analysis of the interannual variability of the ozone content and the factors influencing it is carried out both for the Earth and extrapolar latitudes as a whole, and separately for the tropics, middle latitudes of the Northern and Southern Hemispheres, Antarctica and the Arctic. The calculated linear trends and their significance are analyzed both for the entire period 1980-2020 and separately for the end of the 20th century (1980-2000), the beginning of the 21st century (2001-2020) for the lower and upper stratosphere. The future variability of atmospheric ozone is estimated for the periods 2021 to 2050 and 2050 to 2100.

The main activity of the Upper Atmosphere Unit (Upper Atmosphere) is the study of large-scale processes in the upper atmosphere, including the ionosphere, by methods of mathematical modeling. In their research, we use the Global Self-Consistent Model of the Thermosphere, Ionosphere, Protonosphere (GSM TIP).

The main purpose of such modeling is to interpret the observed variations and disturbances of ionospheric parameters, both in calm conditions and during various phenomena of space weather (geomagnetic storms, solar flares, solar eclipses). Another working tool of the our scientists is the EAGLE model of the entire atmosphere, created by our employees by combining the GSM TIP and the HAMMONIA model (Hamburg Model of the Neutral and Ionized Atmosphere). The use of the EAGLE model significantly expands the range of problems considered, allowing one to study the response of the ionosphere to sudden stratospheric warmings, solar proton events, etc.

An important area of ​​work of the IAS staff together with the staff of the “Magnetosphere and the influence of energetic particles on the atmosphere” unit is the unification of the GSM TIP (EAGLE) models and the GAMERA magnetosphere model for the study of magnetosphere-ionospheric connections. Along with the use of large-scale processes, we can carry out numerical experiments with the AtmoSym high-resolution model, which reproduces the features of the propagation of infrasonic and internal gravitational waves from the Earth's surface to the heights of the thermosphere. In addition, based on the variational method, it is possible to calculate oceanic tsunami waves.

The analysis of model experiments will make it possible to construct and substantiate new parameterizations of the contribution of small-scale waves in large-scale models of the atmosphere. An additional activity of our staff is the collection, processing and analysis (including statistical) of observational data on the parameters of the upper and middle atmosphere, as well as indices of solar and geomagnetic activity.